To Race or Not To Race, That Is the Question

When I started running I just wanted to keep myself going.  I listened to books, took the dog along, ran through the lovely, Olmsted-designed Smith College campus, and ran at whatever pace was comfortable, no pressure.

Then, in October of the first year I was running, 2016,  the weather (in Massachusetts) started to be a real deterrent.  Chilly and damp, not at all inviting.  The first day it was like that I tried using the treadmill in the basement, a hand-me-down from my dad.  I learned that day that I hate the treadmill far more than I hate the cold and damp or even wind and rain or snow.  It is no surprise to me that people call it the dreadmill.  Even watching a movie on the iPad while running on the damned thing didn’t alleviate the torture.  And I was slow as well as bored, not getting nearly as much exercise.

I knew I needed motivation to keep getting out in the cold.  So I signed up for the Hot Chocolate Run for Safe Passage, which happens on the first Sunday in December.  (The cartoon illustrations are by Hilary Price, a local cartoonist who has a syndicated strip, “Rhymes with Orange”.)

One great thing about signing up was that I found out much more than I had previously known about Safe Passage, an organization that helps domestic violence victims with shelter, free legal services, counseling, and more.  In each of the three years I have fundraised I have raised over $800 for them due to very generous friends and family.

The first year I signed up I was terrified I would come in well past everyone else.  I mean, I started out the previous August running at more than 20 minutes a mile – ouch!  But in late November I had been running with times in the low 15 minute per mile range, even some high 14 minute times.  When I went to pick up my bib  (I was getting a bib!  Did that make me a real runner??  It felt like I was at least a bit more of a real runner….) the guys at Marathon Sports were really encouraging and told me I wouldn’t be anywhere near last and that adrenaline would give me a boost.

It feels like the whole town is there on race day.  There are a couple of small bands playing near the beginning/end, even Darth Vader and Star Wars Storm Troopers, for some reason I don’t really understand, and lots of family members and others to cheer people on.  (Do you like Northampton’s Medieval-style town hall?  There are even crenelations at the top.) 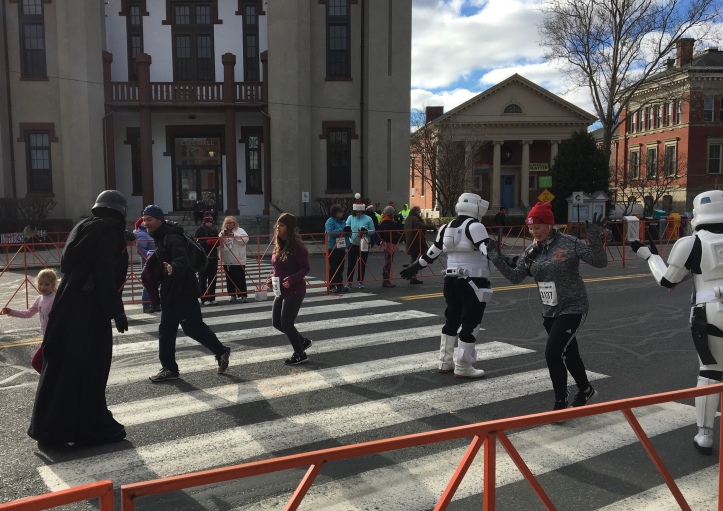 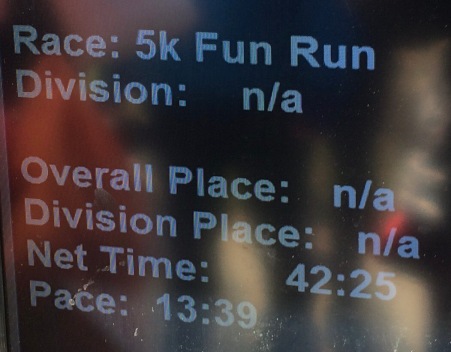 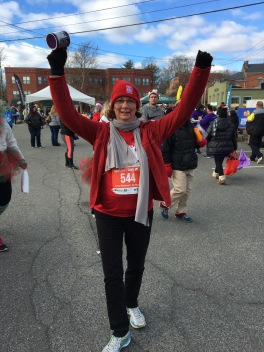 I’m holding the mug every runner gets for hot chocolate at the end of the 2016 race – and before I lost any of the 30+ pounds. 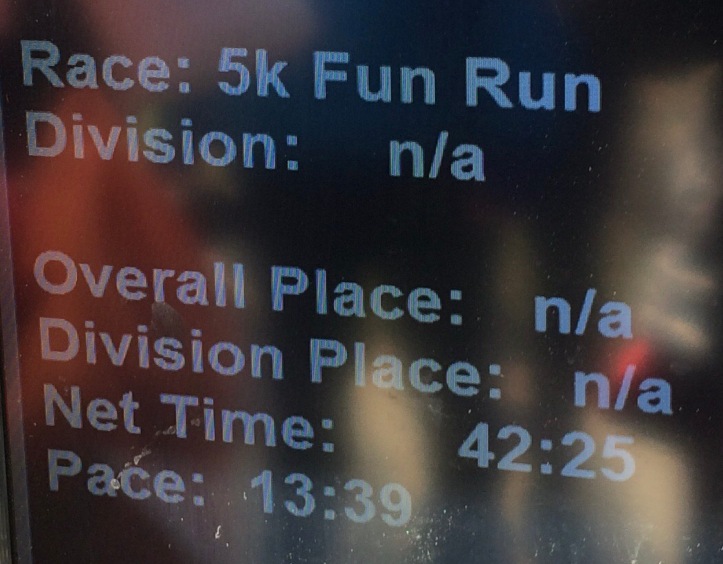 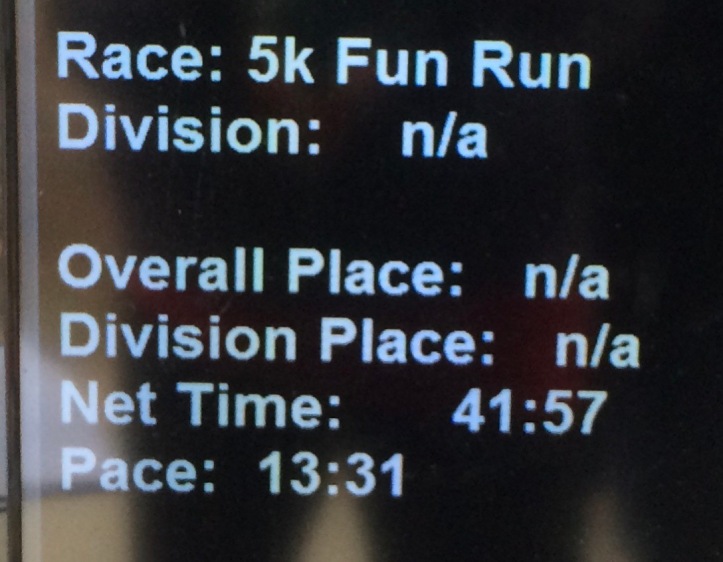 I have been getting faster in the year since the last race, running at about 13:30 per mile or thereabouts.  I felt good about running nearly every day at the pace I ran the two races, or better.  But I felt like maybe there was more to tap.  About a week ago I finally Googled cadence apps for runners.  I kept thinking I could use a beat to keep me going at a better pace, to override my random plodding.  I am a snail by nature and need prodding to combat the inertia that is the core of my being.  There are some cadence apps that will sync your music to the cadence beeper, but according to reviews they seem a bit unreliable, and I thought I’d keep it simple (and cheap – 99¢) and got RunTempo.   It beeps in the background of an audio book or music, so you don’t have to listen only to the beeping.

The first day I ran at 150 beats per minute (each beat is a footfall) and had a great result – for me.  The next day I ran at 160 bpm and ran a route that includes the big hill in the Hot Chocolate Run, a hill that goes from the south side of Smith Campus to the north side.  It’s fairly steep in two sections and feels very long at nearly the end of the race.  The first year I ran the race I thought I might faint at the top and was heartened that there was a cop there because I figured he could deal with my collapsed, possibly dead, body if I keeled over!  (The next year I took it a bit easier on the hill.)  Here are my MapMyRun results for that first day at 160 bpm.

I even did the section with the hill (mile 2) at under 12:30!  My total time, going a half mile longer than the race, was less than my first year’s race time and just a few seconds longer than my second.  I haven’t reproduced these results, being more in the 12:30 range overall even using RunTempo, but it gives me hope I’ll do the race much faster this year.  It really is a miraculous app for me.  It just keeps me honest about my pace rather than zoning out and slowing down.  I love it even though it is pretty annoying listening to the beeps.

Why do I care about my speed?  Increasing my speed is the competing-against-myself motivation, but the payoff  is more than 30 pounds less weight, blood pressure back to normal, blood sugar back to normal, and a resting heart rate of 66.  And I feel 30 years younger than my chronological age – really.  That’s a whopper of a payoff.

To race or not to race?  I know running in a race won’t be for everybody, but for me the answer is a resounding yes!  Think you’re too old?  Listen to this: 70-Year-Old Runner Wants To Beat Her Own Record At New York City Marathon.

Just five more days to the 2018 event, Sunday, December 2nd.  Get your donations in now!  Please go to my fundraising page.

This site uses Akismet to reduce spam. Learn how your comment data is processed.

IMPORTANT: Please note that I am not a doctor or health care professional of any kind.  This blog is my opinion only and I also cannot vouch for the accuracy or credibility of any information I link to.  Any decisions you make based on information presented in this blog are your responsibility only.  You should check with your doctor before starting any activity, including anything mentioned here, and check often to make sure you are healthy enough to participate in that activity.

ALSO IMPORTANT:  All content on this site including all text and images, unless otherwise attributed, are the sole copyright of Hilary Zaloom and may not be reprinted or copied or used in any way without permission whether for commercial or non-commercial purposes, your own blog, or any other use.  Please leave a comment on a post if you would like permission to excerpt or repost.